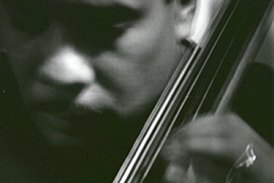 Born October 17, 1956 in St. Louis Missouri, Kent's parents appreciation for listening to all kinds of music around the house was his first introduction to music. Around age eight or nine he took piano lessons for a couple of years. However, because the sounds of B.B. King were often heard in his home, he soon developed an interest in the guitar and soon began studying guitar in lieu of the piano. Around age twelve, Kent had a musical experience that would have an everlasting impact. Kent watched a televised program that featured Ray Brown as a soloist fronting a big band. Witnessing Ray Brown playing the bass would define his music instrument direction.

It wasn't until Kent was sixteen years old that he purchased his first contra bass. By this point Kent was playing electric bass guitar with local R & B musicians around town. In addition, Kent was very much into athletics and had received several honors by the time he graduated high school.

Attending Rockhurst College in Kansas City, Mo. on a basketball scholarship, Kent took music electives from the University of Missouri at Kansas City (UMKC) Conservatory of Music. Graduating in 1979 with a degree in Business Administration and receiving All American honors in basketball, Kent returned to St. Louis and enrolled in the St. Louis Conservatory of Music. With all energy now focused on his music he began private bass studies with Warren Claunch of the St. Louis Symphony Orchestra. He was soon befriend by St. Louis jazz historian Richard R. Henderson. This association was the catalyst that would take Kent's awareness of the idiom of Jazz music higher than any other formal setting had previously done.

In 1995 Kent relocated to the Washington DC area, where he resides today. Playing with many great local and national artist, Kent is a current member of the Michael Thomas Quintet and Steve Carrington Quartet.