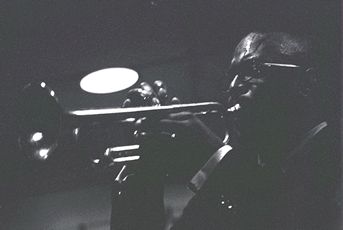 Born in Las Vegas, Nevada, Michael began his musical life as a thirteen-year-old trumpeter. At that time, he saw his first REAL dancing marching band on television. It was the Grambling State Tiger Marching Band! "From that time on," says Michael, "I knew that I wanted to be in that band. I had never seen anything like that before." His parents and aunt, all from Louisiana, attended Grambling, and had a lot to say about the band. His mother, school teacher and ardent jazz fan, would play her jazz albums and be boppin' around to Jimmy Smith and Clifford Brown. His father, school teacher, choir director, and church congregational leader, was a devote Ray Charles fan. Vegas was never a jazz town, so Soul, R&B, and Show bands were the sounds he heard the most of during those times. All the while, Michael was getting a firm background in traditional trumpet and French horn techniques.

Throughout high school, Michael earned positions in the All-County and the All-State Ensembles playing French Horn. He also regularly performed with the Las Vegas Civic Symphony under Phil Gromco. From that point, it was time to go to where else, but to Grambling State. At Grambling, he majored in music performance and computer science. Michael took full advantage of all music ensembles including, of course, the Marching Band and the Jazz Ensembles. Under the direction of Conrad Hutchinson Jr., he learned what hard work and dedication can do for a performing group like Grambling's band. Michael worked his way through the ranks, and ended his career with the band as drum-major. "Hutch would rather march with a hole in the band than have someone in it making mistakes. Plus he would leave you behind," notes Michael. "He did not tolerate mediocrity at ALL."

From all this, Michael did not awaken into jazz until late in his college career at Grambling. "I was in Upstate New York and went to go see some jazz in Poughkeepsie, NY. I had learned maybe two songs and said I was going in. The club was under a restaurant, the smoke was thick, and the music was even thicker. A lady named Lillie Howard was singing there with Hugh Brodie on tenor, Midge Pike on bass, Ferdy Everett on drums, and Richie Diamond on piano. This was my first REAL contact with jazz. I asked to sit in with my pocket trumpet. They were VERY gracious to me because I must have sounded terrible. After it was all over, I called my mother in Vegas, COLLECT, and told her that I've found it" re-counts Michael. From that point on, Ms. Howard, Hugh Brodie, and Ed Smith( vocalist and organist) took special interest in Michael and helped him grow up into the music. "They really helped me see what jazz was all about and I love them for it," say Michael.

Michael then met New York native Bill Saxton (Tenor MONSTER ), who introduced him to the New York scene. Thereafter, he met Donald Harrison, Philip Harper, Errol Parker, and others. He frequented the city's jazz scenes and did whatever possible to learn more about the music. He then ventured to lead his own group in Upstate New York, plus performed regularly with Ms. Lillie Howard and Ed Smith. Michael also spent considerable time in Philadelphia playing at various spots. "I love Phili because there is always something special in the air there. Plus, they can swing. Everyone swings in Phili !" , notes Michael. In 1993, while playing with the Errol Parker Tentet, he went to France to play in the Normandy Festival, and to do some clubs dates in Paris with Bill Saxton.

Michael left Upstate New York, in 1993, in order to move to the DC/Maryland area. Since the move, Michael has become an integral part of the DC jazz scene. In 1996, Michael was a scholarship recipient in the Fish Middleton Jazz Scholarship Contest at the East Coast Jazz Festival. To date, he has played with a number of notable musicians such as Betty Carter, Jimmy Heath, Larry Willis, Shirley Scott, Bootsie Barnes, Buck Hill, Webster Young, Gary Bartz, Joe Williams, and others. He hosted jam sessions at HR-57 (Center for the Preservation of Jazz and Blues) for three years and does jazz education seminars with Nasar Abadey. Michael is now performing with his Quintet regularly both in and out of the DC area. Michael is a regular member of Tootsie Gripper's Jazz Vespers Ensemble. The Vespers group also includes Keter Betts and Buck Hill.

Michael is continually pushing himself to grow musically, and is a fine example of what dedication can do. He always places jazz in its proper light, and feels that it is necessary to grow and nurture the music. "The music must go back into the African-American community so that the current and next generations can see what a profound art it has created," says Michael. "I love this music!" Michael Thomas's 'Big sound and fire' makes him well suited to continue the Music the way it should be played.